Here's what I call a wonderful story about bigots who hate Israel. It comes to you via the blog, elderofziyon. I have it for you today, unedited.

This story reminds us of a strange truth: those who love to hate Israel cannot abide truth. The reason is simple: only lies consistently lend themselves to the demonizing of the hated Jew-state. The truth is too unwieldy for such a task.

This story below illustrates the first half of this point--that lies are the best way to attack Israel. This story also suggests that Israel-hate has no interest in the successes of the Jewish Israel. The only thing Israel-haters seem to care about is how to  misrepresent the Jewish narrative in order to abuse the Jewish state.

Indeed, this story may prompt you to wonder: if this is what Israel-haters have to do to make their anti-Israel case, maybe they have no case to make.

If you look closely at the post below, you'll see that the 'Israel-hater' in this tale is something called, BDSsouthafrica.

Take a look. Have a laugh. Draw your own conclusions:

Here's a photo of Jewish refugees in an Israeli absorption camp in 1950. About 80% of the residents of these camps were Jews who were forced to flee from Arab countries. 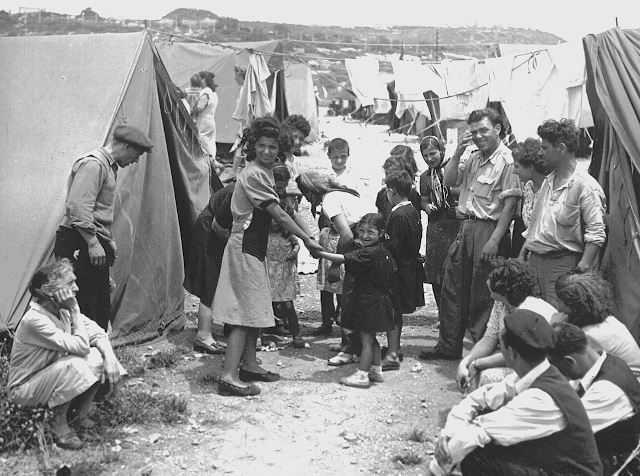 The picture symbolizes how Israel took in hundreds of thousands of Jewish refugees and integrated them into Israeli society as full citizens.
This is in marked contrast with how Arab nations treated Arab refugees and other Arabs who fled Palestine in 1947 and 1948. Those people were not welcomed, not integrated into their host countries, and are to this day used as political pawns.
Wednesday was World Refugee Day. The viciously anti-Israel Congress of South African Trade Unions, posted on Twitter [this] photo of the Jews who are no longer refugees to illustrate the fate of Arabs who the world still calls refugees - still using them as pawns for political purposes: 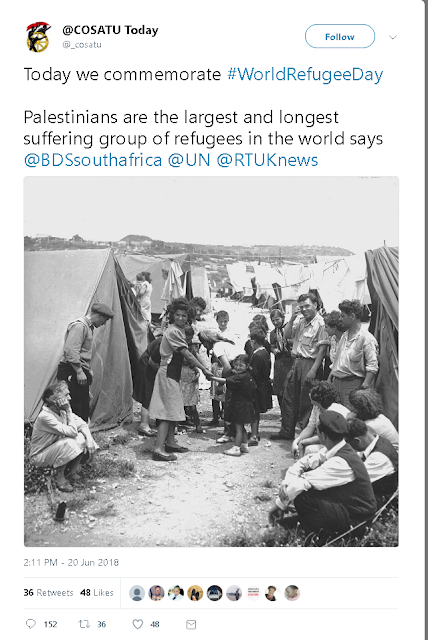 Dozens of people pointed out to COSATU that the photo was not of Palestinian Arabs. They didn't care, because to the people who hate Israel, the truth is not important  - the propaganda is.

The point of these 'Palestinian' refugee pictures is to 'show' the world--or to suggest--the supposed brutality of Israel--for supposedly having caused the problem, when she didn't (here). Those who attack Israel (like BDSsouthafrica above) certainly do not want anyone to see the Jewish success in gathering in Jewish refugees because that could provoke an embarrassing question: if the Jews solved their refugee problem, why couldn't the 'Palestinians'/Arabs?

There's another angle to this Jewish 'refugee success'. Those who hate Israel render themselves stupid. They accomplish this by resenting truth. They won't talk about how (in contrast to Arabs to whom 'Palestinians' turned), Israel after 1948 gathered in its Jewish refugee brothers and sisters, and used their talents and efforts to make Israel great. Israel-haters, by contrast, choose not to solve the 'Palestinian' refugee problem all, but to perpetuate it.

They won't study the Jewish refugee success as a model for their own refugee effort. They'd rather ignore, steal, twist and otherwise misrepresent Israel's refugee success to make/suggest a case against Israel.

If that's how these people must operate to attack Israel, they fail. If anything, these kinds of twisted arguments have an opposite effect: they suggest that the only way they can attack Israel's legitimacy is to lie.

Tuvia
I am a pro-Israel advocate who supports Israel's growth and prosperity. Essays here focus on issues that appear central to Israel's existence as the world's only Jewish state. I do not expect every reader to agree with my point of view. Polite feedback is encouraged. I publish 4 -6 times a week. Please check in regularly to find new posts.